Ahmad Al Khatib and Youssef Hbeisch created the duo Sabîl (Arabic for ‘path’) in 2011, a collaboration they consider a ‘life experience’1, each project together punctuating their respective musical journeys. Their first eponymous album, released in 2012 to widespread acclaim, was a marvel of expressiveness and depth. Their next album, Jadayel, the result of a fruitful encounter with the French contemporary quartet Béla, was created during the summer of 2014.
For their third album, Zabad, the duo’s musical creation draws new breath. The group might have fleshed out, but the music has become lighter. At the start of each new project, Ahmad, the composer, does his utmost to renew his music in relation to the previous project, to find a different state of mind, a different way of thinking, a different way of creating. Following on from the sophisticated Jadayel, Zabad therefore avoids polyphonic complexity and harmonic surprises in order to emphasise the heterophonic effect of the instruments, the sound and the improvisation. Zabad means ‘foam’. Lightness, perseverance, the foamy ebb and flow, all come together in the music.
1.Interview with Ahmad Al Khatib, May 2016. 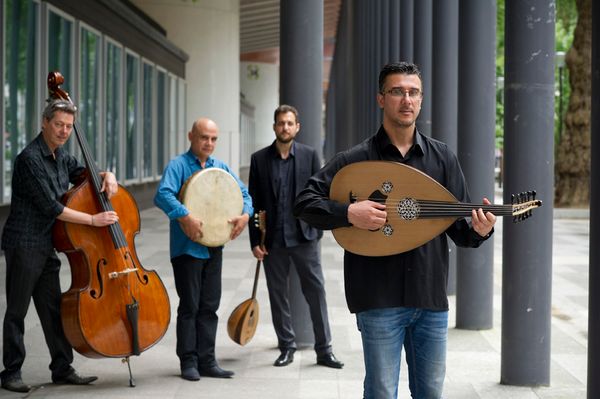 A lightness of music and sound

Whether it be the crystalline notes of the buzuq, the bells, or the gentle brush and caress of the cymbals, Zabad offers the very lightest of sounds.
From the first track, ‘Samai’, there unfurls an intricate musical filigree. The buzuq and oud, as usual, provide all manner of ornaments: vibrato, appoggiatura, glissando, pizzicato, even tremolo from the oud. Each figure embellishes a dialogue of exquisite delicacy, accompanied with equal finesse by the riqq and the double bass.
In keeping with the idea of lightness, ‘Awalem’ is preceded by a prelude (track 4) in the Rast mode, common in Egypt, a joyous piece bursting with energy, in the spirit of a cabaret dance, light music par excellence. Joy and lightness offer respite from the mournful beauty of the darker moments, a chance to catch one’s breath. There is sadness here nonetheless, but a sadness that does not weigh you down. First and foremost there is ‘Zabad’ in the Hijaz mode. Well known in Oriental music for its minor second in a major mode, thismode, originating in the deserts of Saudi Arabia, supposedly takes its inspiration from the slow march of the caravans. It also conjures feelings of solitude and enchantment. From the desert to the sea… the opening tempo emulates the gentle swaying of the waves, the foam eddying on their rise and fall. You can imagine the wind getting up, followed by a return to calm, to a melancholic poetry.
The prelude in the Nahawand mode (which corresponds to the harmonic C minor scale) expresses a solemnity tempered with tenderness. It leads into ‘Northern breeze’, a piece in two parts whose melodic and harmonic lines are in close harmony. The first part is slow and meditative, the second is performed in a rapid 6/8 time.
‘Marakeb’ (boats) recalls the skiffs of the Gazan fishermen, forbidden from going to sea during the Israeli sieges, floating in the port, empty and useless2. The quasi-figurative style of the 5/4 rhythm brings to life the bobbing of boats at rest. Inspired by the Sufi tradition, this piece in the Awshar/Sikah mode provokes feelings of emptiness and futility. The lightness is therefore also one of meaning: the images created by Ahmad are never forced. They give rise to emotions in which each of us is free to interpret, or not, a message.
2.For Ahmad, the piece now also brings to mind images of refugees in the Mediterranean. 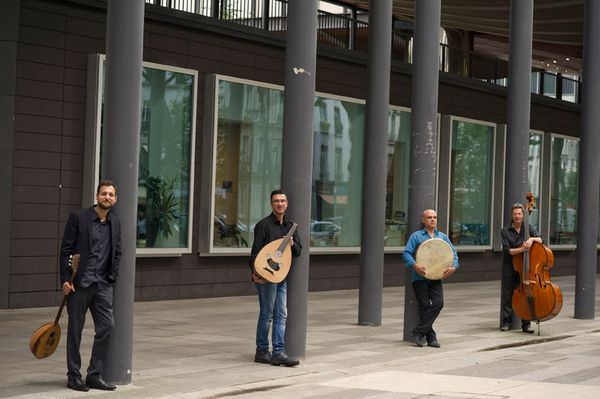 The endurance of Arabic musical tradition…

…defines the colour of the ensemble and the rules of play.
An album that opens with a samai immediately proclaims its bond with tradition insofar as the samai is an artistic form (much like the rondo) subject to certain fixed patterns. It is composed of four verses, alternating with the chorus, the chosen maqam (in this instance, Bayat) is revealed in the first verse. The remarkable modulations of the buzuq are also predefined, and remain firmly in the traditional spirit.

Mathematics and aesthetics, the rules of Arabic music are, as is well known, strictly organised according to the system of maqâmât, families of modes, themselves further divided into subgroups. Thus each maqam carries a tradition which defines the tonic note (starting note), the dominant note, the ending note and the tonal-spatial organisation. Each maqam also carries a tradition which defines its melodic development: modulations occur when passing from one maqam to another, which must be compatible or closely related. Moreover, each maqam is associated with a particular emotion or mood. As Arabic music is melodic, the chosen maqam determines the overall colour of a piece3.
However, if certain maqâmâts are indicated by the titles of the tracks, reverence does not mean deference. Rules are made to be broken; they tacitly invite gentle transgression.
3.http://www.maqamworld.com 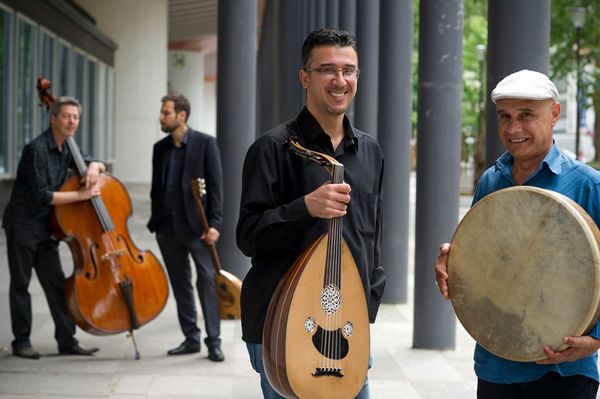 A journey towards freedom

From the past to the future, from rules to liberty, a groundswell of change surges from the very first to the very last note of Zabad, from a respect for tradition towards the freest possible form of improvisation. Already the 9/8 rhythm of ‘Samai II’, for example, deviates from the recommended 3/4 or 4/6 time. Then, throughout the album, the double bass gradually displays its originality. Furthermore, the creativity of the composer and his musicians gives rise in various places to contributions from diverse cultures and the exploration of previously undiscovered paths. Composition, phrasing, all the techniques employed are nourished by a juxtaposition of the old and the new. The presence of the double bass and the buzuq alongside the oud is hardly conventional. For all that, far from displaying a bewildering lack of direction, this foam does not wander like a lost soul, but flows with the fearless curiosity of one who surrenders to the rhythms of the world. Ahmad’s compositions contain tracks devoted to improvisation, expressly to allow for a full exploration of the possibilities of each mode. Thus, the two preludes (in the Rast and then the Nahawand mode) are designated improvisation spaces. Initially, it is the oud and buzuq that improvise with great verve, according to the traditions of modal music. Until the final piece, when a moment of freedom is vouchsafed to the musicians; a moment recorded in the studio in all its exuberant spontaneity. Even if Hubert and Youssef have already engaged in polyrhythmic jousts (‘we complement each other better all the time on this playing field’), Ahmad is careful to leave them a certain freedom from the traditional codes. He trusts that, at any given moment, they will hear what works, or doesn’t work, whatever the dose of experimentation to which this gives rise. As Hubert explains with delight: ‘I can express myself in my language, I am not straitjacketed by rules.’ The challenge: how far is it possible to go without losing connection with the melodic colour of the ensemble? How far can you string out the relationship with tradition without it becoming no strings attached, be they plucked or bowed. In the improvisations recorded for Zabad are sown the seeds of ever more daring freedoms which the musicians will cultivate in concerts to come. Their familiarity with each other in performance and the atmosphere on stage, unique to each setting and each audience, will spur their courage to venture further along paths already embarked upon, or to propose directions as yet unexplored. In other words, musicians caught up in the pleasure of exchange and performance, and given the freedom to express themselves, will set a course for joyous discovery. Thus, during these dark times for the Middle East, the essentially universal dynamics of these improvisations offer hope. Zabad, or the foam of nights.